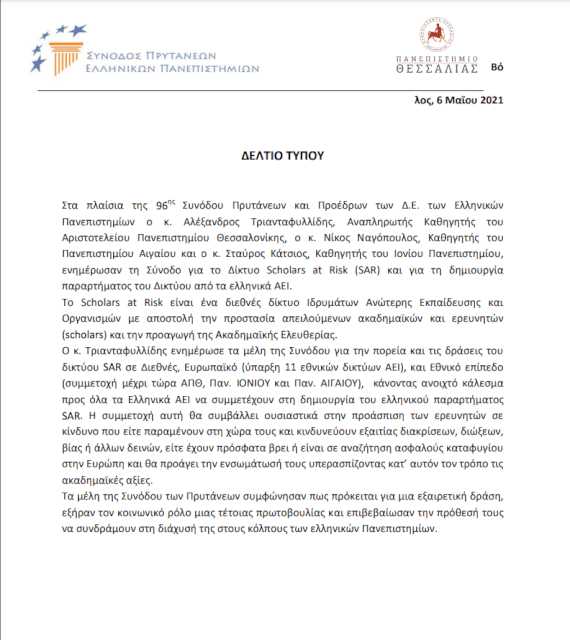 In the context of the 96th Conference of Rectors and Presidents of ACs of the Greek Universities Mr. Alexandros Triantaphyllides, Associate Professor of the Aristotle University of Thessaloniki, Mr. Nikos Nagopoulos, Professor of the University of the Aegean and Mr. Stavros Katsios, Professor of the Ionian University, informed the Conference about the creation of a branch of the SAR Network by Greek universities. Scholars at Risk is an international network of Higher Education Institutions and Organizations with the mission of protecting threatened academics and researchers (scholarships) and promoting Academic Freedom. Mr. Triantaphyllides informed the members of the Conference about the course and actions of the SAR network at International, European (existence of 11 national networks of universities), and National level (participation so far AUTH, the Ionian University and the University of the Aegean), making open invitation to all Greek universities to participate in the creation of the Greek SAR branch. This participation will make a significant contribution to protecting researchers at risk who either remain in their country and are at risk of discrimination, persecution, violence or other suffering, or who have recently found or are seeking safe haven in Europe and will promote their integration by advocating in this way for the academic values. The members of the Rectors' Conference agreed that this is an exceptional action, praised the social role of such an initiative and confirmed their intention to assist in its diffusion within the Greek Universities.